Cerro Castillo National Park has a diverse ecosystem with a plethora of Andean flora and fauna. Visiting the park, you’ll be amazed at the variety of landscapes there is to see as well as the possible fauna visible from the hiking trails and Carretera Austral. It’s one of the few places supporting a healthy humuel population, an endangered deer species, and also is home to the famous Andean condor, mountain lion, and guanaco.

The fauna is protected in the Cerro Castillo National Park and you can review the code of conduct to remember how a wild animal should behave. Learn about these incredible animals and how you can see them in their natural habitat. 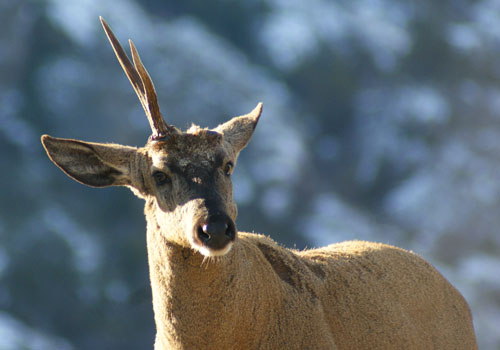 You can recognize the huemul deer given that it is one of the symbols of the national shield of Chile. Unfortunately, today it is an endangered species after long years of indiscriminate hunting, thus finding itself in danger of extinction. The huemul is the southernmost deer in the world, also known as the Southern Andean deer. It belongs to the Cervidae family that lives in the Andes mountains of Chile and Argentina.

Its dense and thick coat allows it to swim easily in the cold waters of Patagonia and protects it from the winter weather and strong winds of the mountains. Only the male huemul has antlers (set of horns).

This is changed every year, it shedes its antlers at the beginning of winter and in spring begins the growth of a new one. 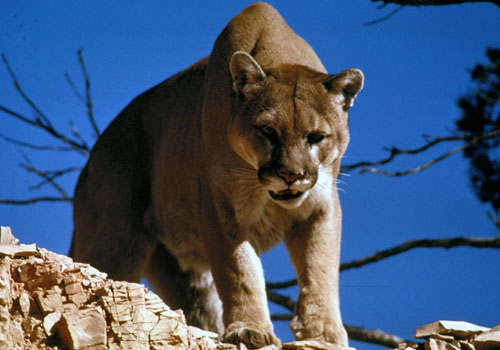 The puma, also called the mountain lion, is considered the largest cat in Chile and the fifth largest in the world. It is a carnivorous mammal of the family Felidae native to America, so you can find it from Canada, to the Strait of Magellan. It has strong front legs, with retractable claws, which allow it to pursue its prey at high speed, reaching up to 72 km / h and climbing skillfully. They develop a large jaw and fangs which they use to catch and kill their wide variety of prey.

What should you do if you come across a mountain lion?

Pumas usually fear humans and cases of attack on people are rare. Although they will not hesitate to attack if they feel threatened, for that reason: you should not approach it if it is eating or with one of its cubs. 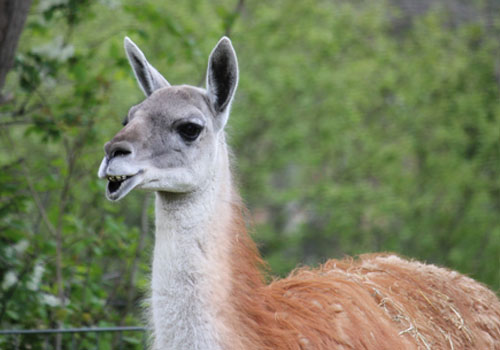 It is a kind of artiodactyl mammal, that is, it leans and walks with the end of its fingers, which comes from the family Camelidae, typical of South America. Unlike the related domestic species, the alpaca and the llama, the guanaco is a wild species. He lives in the mountain ranges and highlands of Chile, Argentina, Bolivia, Peru and Paraguay. His body is covered by a long, soft and fire-colored hair, except in the abdomen, which is white. Believe it or not, the guanaco is a good swimmer, capable of crossing from one island to another in places like Tierra del Fuego. They are fast animals, which manage to run at 64 km / h, but due to their enormous curiosity they become victims of their predators. Tts biggest predator is the puma and occasionally the red fox. 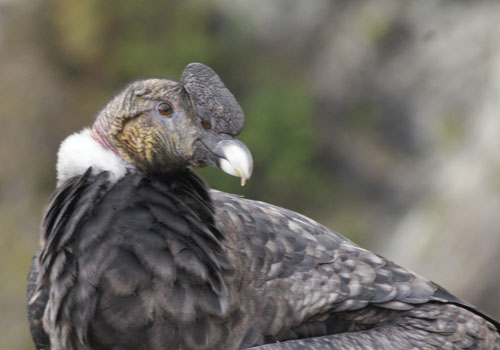 This species is generally associated with the Andean mountain range from Colombia to Argentina and Chile. In Chile it is distributed along the entire Andes mountain range. It is the largest flying bird (not marine) in the world. When fully extended, it has a wing span from tip to tip of up to 3 meters!.It has a general black coloration, with white feathers around the neck and in parts of the wings. The head has no feathers and is red, being able to change its shade according to the emotional state it has. It is a scavenger bird, which means that it feeds on carcasses of animals without having participated in its hunting, though occasionally it has been seen hunting small rodents.

The condors are monogamous and reproduce every two years due to the long period of paternal care that the offspring require. This makes them one of the species with the lowest reproductive index in the animal kingdom.

Other animals that can be found in the park are the red fox, Patagonia chingue, Magellanic woodpecker, and many more birds.

We know that nature is one of the best ways to disconnect from the technological world, relax and release stress. Enjoy the Cerro Castillo National Park while taking care of the wild flowers and the native vegetation. Please leave plants, logs and stones in place to take care of the ecosystem and natural balance of this amazing place as well as enhance the experience of future visitors.

Some examples of flora that you will find in Cerro Castillo National Park are: 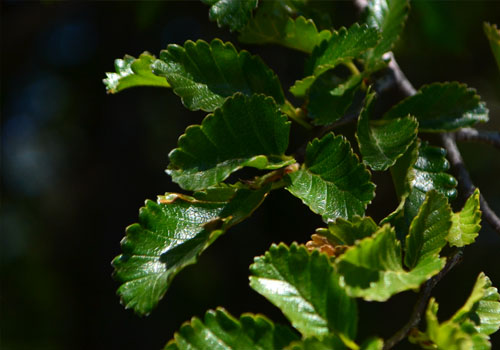 In terms of vegetation, visitors will primarily find deciduous forest made up of several types of trees that lose their leaves at the beginning of winter, namely the Andean beech, lenga and nire.   The leaves of the lenga are small and green with sharp teeth at the edges. This tree reaches on average 30 meters high and occasionally you’will see how the lengas grow strangely and twisted. This is due to the modeling that is generated through the wind, adopting the name of krumholz or “twisted wood”. Below its main branches, lengas also provide shelter to some of the animal species that inhabit the region, including the Black Woodpecker, Culpeo Fox and the huemul (which sometimes feeds on the lenga).

The ñire is a close relative of the lenga. They are a first glance very similar, but they differ in that the ñire is smaller and has more leaves than the lenga. This tree reaches to measure between 10 and 25 meters high and is a popular wood used in homes with wood stoves.

Ñire is a word in the Mapuche language that means fox. It was adopted because these animals usually make their burrows under these trees. 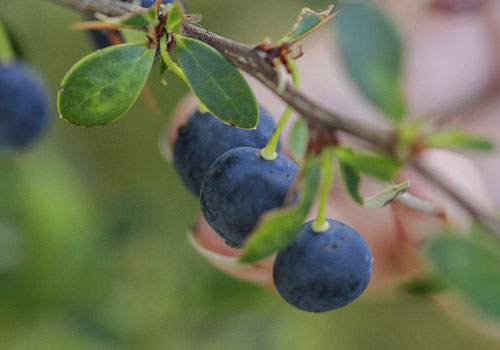 Another well-known plant that you can find in the park is the calafate bush, (Berberis buxofolia). El Calafate is an evergreen shrub (it does not die or fall with the arrival of autumn). It is endemic to Patagonia Argentina and Chilena.

The flowers of the calafate are hermaphrodite, that is, they have both organs, both female and male, which are pollinated by various insects. They bloom during the months of October to January. Its fruit, also called calafate is a simple fleshy fruit of dark blue color, which is collected in summer for fresh consumption and also for the preparation of jellies, liqueurs, jams and syrups. In addition, the plant is used for dyes and home remedies to reduce fever. You will always know who was eating the calafates for the blue lips and teeth!

There is a myth Selknam and Tehuelche that tells that who eats the fruit of the calafate always returns to Patagonia. Why not give it a try?

For our more scientific visitors, there are 5 different types of vegetation or ecosystems in the park:

Corresponds to a low and very open grassland.

Corresponds to a complex of communities characterized by the presence of Acaena splendens. Festuca pallescens and Mullinium spinosum.

It is a deciduous forest dominated in a high tree strata by the beech family, specifically Nothofagus pumillo (commonly referred to as the lenga) and frequently also by Nothofagus betuloides  (Coigüe de Magallanes).

It is an evergreen forest dominated by Nothofagus dombeyi (the coihue​ o coigüe ) and with N.betuloides as an eventual species, in the high tree strata; a tree strata of lower height dominated by Embothrium Coccineum  (the Chilean firetree); and a shrub layer where Fuchsia magellanica (commonly known as the hardy fuschia) is very abundant.

Corresponds to sites of low slope and with a permanent contribution of water, which marks an azonal condition, and favors the growth of hydrophilic herbaceous species. They constitute small ecosystems in very localized and relatively isolated areas, or constitute a complex of more or less continuous or chained wetlands that occupy the drainage lines in mountain ranges and plateaus or in the floodplains of the great valleys.

Our staff are ready to help you plan your trek. Beyond our office team, we also have professional guides in the park who are available to answer questions during your trip. Before sending us an email, please head over to the frequently asked questions to see if your question has already been answered. We look forward to hearing from you!

We will wait for you!